Who was St. Patrick?

St. Patrick, (feast day March 17), is the patron saint and national apostle of Ireland. He is credited with bringing Christianity to Ireland and probably significantly responsible for the Christianization of the Picts and Anglo-Saxons who inhabited Ireland in the 4th and 5th centuries. Patrick is known from two short works, the Confessio, a spiritual autobiography, and his Letter to Coroticus, a denunciation of British mistreatment of Irish Christians.

Patrick was the son of Romanized Britons who lived an affluent life on the west coast of that country until he was kidnapped by Irish raiders and enslaved sometime around 400 A.D. He spent six years as a slave in Ireland and at this time, his faith deepened and he became convinced of his priestly vocation, which he fulfilled on his escape and reunion with his family. He returned to Ireland and began preaching, teaching and baptizing all who would accept Christ. His spiritual memoir, the Confessio, is considered a great and moving record of faith put to work, and at the same time, a shining example of simplicity and sincerity as a mark of the true Christian.

Veneration based on the character of St. Patrick’s life and his remarkable works began to spread as early as the 7th century. He was attributed with raising upwards of 30 people from the dead, with causing snakes to drown themselves rather than cross his path, and with causing food to appear before hungry people in desolate areas. One wonderful legend claims that St. Patrick used the shamrock clover to explain the nature of the Holy Trinity to his students and this symbol is very often associated with him.

St. Patrick’s patronages include protection from snake infestation and bites, and he is a patron of engineers due to the large number of churches he constructed in Ireland. 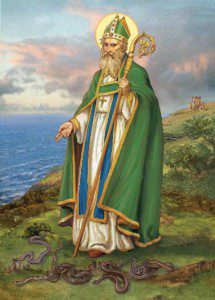 I bind unto myself today the power of God to hold and lead, His eye to watch, His might to stay, His ear to hearken to my need: the wisdom of my God to teach, His hand to guide, His shield to ward; the Word of God to give me speech, His heavenly host to be my guard.

I bind unto myself the Name, the strong Name of the Trinity, by invocation of the same, the Three in One, and One in Three, of Whom all nature hath creation; Eternal Father, Spirit, Word: praise to the Lord of my salvation, salvation is of Christ the Lord. Amen.